Passing the football is critical to a balanced offensive attack in any form of football including electric football. Defending against the pass is also critical to the defense.

Electric football games have always included a passing / kicking figure for kicking and passing the football – the TTQB. Completing a pass is simply a matter of flinging a small felt ball to a receiver and hitting that receiver with the flying ball. This can be quite challenging and requires the development of a certain amount of skill.

For those who are not able to develop the skills to accurately throw the “pill sized” football or limited by other physical handicaps, their offensive strategy is often limited to running the ball only.

But thankfully due to the creativeness and ingenuity of  innovators of the game, passing can be apart of every electric football coaches offensive and defensive strategies.

Perhaps the simplest alternative to physically passing is the use of dice and charts or spinners. Good methods but completely random results with no chance of defending against accept by luck.

Pass placement is another method, first proposed in a set of rules known as “Rules 2K”. This suggested placing the ball in front of the receiver according to the number of yards the receiver had advanced beyond the line of scrimmage. This allowed the defense to “make a play” on the ball with defenders closing in in on the receiver, limiting the number of yards after a catch and a better chance for  making an interception. Of course since the distance was based on yardage, distances vary by the scale of the board.

It didn’t take long for pass placement to become a commonly accepted method of passing in all forms of electric football competitive game play. But soon sticks were developed to aid in the placement of the ball. Different sizes were mostly hand made to conform to the different scale of game boards being used. 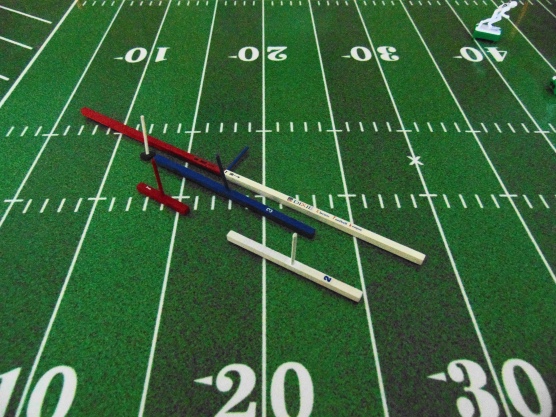 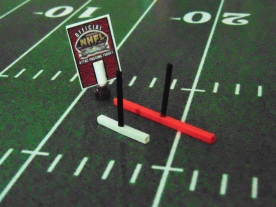 Another system of target passing sticks

Passing sticks designed by Joel Burt of themajorpress.com and sold by Tudor  Games

These passing sticks are based on base lengths rather than yardage distances so they are easily adaptable to any size game board.

Another dimension was added when targets were added to the mix. This brought back using the TTQB to first throw the ball to hit a target and then complete the pass by having the receiver run to the target.

The “ball on a string” is another passing alternative that has been introduced to the game in recent years. This simply just hangs the ball above the playing surface instead of placing a magnetic ball on the playing field. 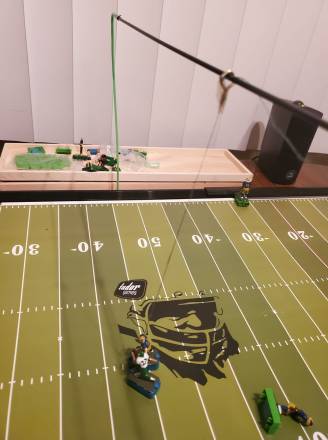 Thanks to Bruce Tripp for this photo. 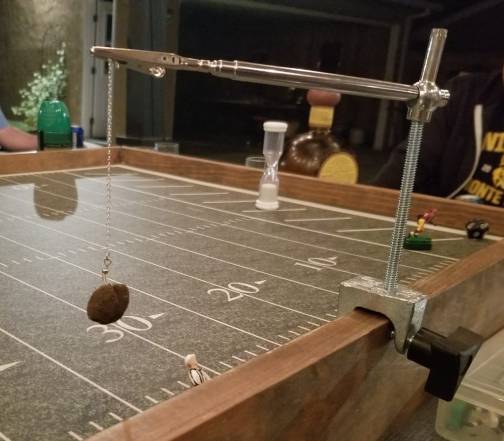 Thanks to RIco Mo for this Idea

Pressure sticks is something else that has been added recently. Click on the link to read a discussion of this “innovation”. https://forum.tudorgames.com/topic/88-pressure-sticks-size/?tab=comments#comment-2190

It simply amazes and overwhelms me sometimes at all the things that have been created and invented to improve the game of electric football and add to its history.  From its very beginning, players of the game have always been encouraged to “change or add to the rules as they desire to create increased interest.”